It's been awhile.  Like a LONG while.  There's actually so much to catch up on that I don't even know where to start.  I feel the need to write though.  For one, I miss it... but more importantly, there are so many memories and cute sayings and moments with the kids that I want to capture.  I want to remember.  So I decided to start by taking one kiddo at a time and recording some of the things that have been happening this year.

I'm pretty sure I told you about Casey in the kindergarten line already.  It's the sweetest thing I've ever seen.  He waits with me everyday until the last minute... then when his teacher comes to get his line, he reluctantly goes inside the gate.  Don't get me wrong, he LOVES his teacher, Mrs. Henry.  I'm pretty sure she's the best kindergarten teacher on the planet.  She is the perfect mix of being completely lovable and having the class under control at the same time.  She smiles and sings and has the cutest, most creative ideas like family art day and a manners tea and she even wrote me an email to check on Casey when he hit his head at school.  The class is so in love with her that they pretty much do whatever she says.  Anyway, back to the kindergarten line.  Maybe it's because I never got to experience this with Jacob and Gavin because they took the bus in kindergarten?  After the teacher greets each kiddo and gives them a giant hug, the line starts moving inside.  Meanwhile, Casey (who always stands at the end of the line) walks backwards, yelling, "BYE MOM!  BYE!  BYE MOM!" and blowing me kisses until I can't see him anymore.  Then usually, right before he is out of sight, he will blow me one. more. kiss.  My heart.

Adam asked me one day, "What takes you so long to drop the boys off at school?"  I told him it was because I waited with Casey everyday until his teacher walked him to the classroom.  He just didn't get it.  I said, "I know from experience... this time of hugs and blowing kisses in the kindergarten line is short.  I know because Jacob was just like Casey at that age.  Next year, he'll be with the big kids and I won't be able to watch him anymore.  So I'm going to stand there everyday until I can't see him anymore... because it's the best 20 minutes of my day."  Then it happened.  One day, before going in the gate, Casey pulled me aside and said, "Mom, I have to tell you something very important.  I don't think I'm going to say goodbye anymore because I sink I might be embarrassed."  (I think he was starting to realize that he was the only one yelling out to their mom amongst all of the kids in his class.)  I could feel the tears start to sting in my eyes and I gave him a hug.  "Okay buddy."  I said.  "I love you."  This was just a few weeks before the last day of school.  To my relief, he still blew me those kisses in the kindergarten line until the very last day of school (although he used to be oblivious with his loud goodbyes, they turned into a soft, quiet, "Bye mom.") That last day was especially emotional... because normally, you don't know when the last day of something special will be (http://hannahhelpme.com/blog/when-did-I-last-wash-your-hair/)... but this time, I did.

Thankfully, he still wants to cuddle at night.  As much as I feel like I want to collapse on the couch, I take him up on it almost every time.  Again, because I know the nights that he will want to cuddle with me are dwindling.  The routine is pretty much the same each night.  He hides Wolfie somewhere in his bed and asks me to find him.  Then sometimes he asks to brush my hair.  Sometimes he asks me to pray for him.  Sometimes he asks me to tell him something about when I was a little girl.  But we always talk and cuddle and tell stories... and I cherish this time with him.  One night, he said, "Mom,  I don't want to go to school because I don't want you to leave me."  Then I responded, "I don't want to leave you either."  He said, "Then why do you drop me off??"  Sometimes when I am lying there, he will gently put his little hand on my back.  It's these moments that make me want to freeze time more than anything... to somehow feel that gentle touch on my back forever.  If Adam comes to sweep me away to bed and Casey isn't asleep yet, he will grab me and plead for me not to leave him.

I love how Casey isn't afraid to talk about God, even at school.  He tells me that he asks his friends if they know Him.  When they had to fill out turkey feathers for what they are thankful for, Casey wrote God and Jesus.  At first, he was the only one in his whole class.  Then, I noticed on a different project where the students were writing what they were thankful for, other kids started to write God and Jesus too.  Making an impact in kindergarten... so cool.  Then, a few weeks later, Mrs. Henry invited the parents to the classroom to show a slideshow of what each student wanted to give their mom for Christmas.  Casey wrote, "I want to give her a cross necklace and a God and Jesus heart."

Another thing I love are his cute mis-articulations.  Like he says "I sink" for I think.  Momma, I siiink we should go to the pool?  Then he would follow it up with, "Could that be cool?"  Or he would say, "Mom, the thing is..." all the time.  Which I never knew where he got that from... until I caught myself saying it one day.  I also loved it when he calls the Super Bowl the Super Goal.  And how he calls pizza sauce potato sauce.  And he says Walmark for Walmart.  So cute.

The man I love!

Lovin' on my Boys
Proud wife and Mom of three boys who absolutely melt my heart. I am blessed to spend my days at home loving on Jacob, Gavin, and Casey. We are in the process of adopting a little girl from Russia! 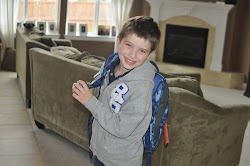 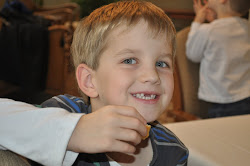 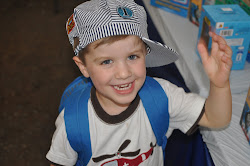